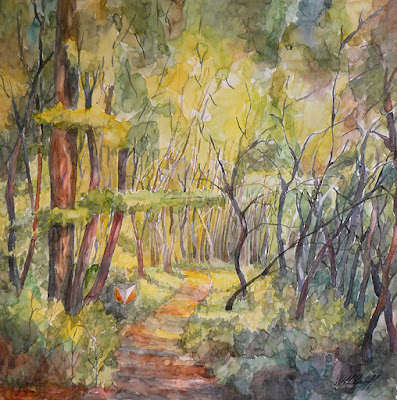 More than anything, a retinal memory
of untailored woodland beside the train.
1989. September. Two months before
dissident sledgehammers undivided Europe.
Distracted by an Indian summer’s drought,
we took photos of dried-up riverbeds
on the tributary between Chinon and Saumur.

Not long married but with commitments made,
this was to be our new and adult world.
1989. September. And those crackling shots
weren't fired in anger, as it turned out,
but by a business party hunting duck
from dinghies moored along the other bank:
they looked to be set on taking the lot.

1989. September. We were on the move,
keeping to hostels and campsites on the Loire.
Without a map, we knew where we’d been:
municipal places, neighbourhood stores,
those unlikely, welcoming foyers.
Paths splayed out from the edge of the forest
into the untailored woodland beside the train.