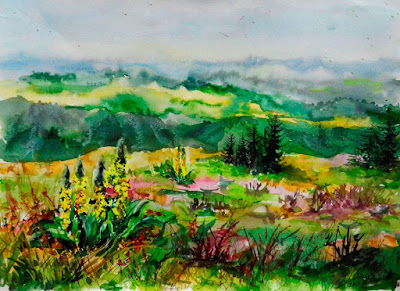 Reading of border country, how easy to be put in mind –
as if it really were a thought refusing to disperse –
of thick cloud above the innocent countryside
and the furthest station we were allowed.
At the end of a different world, we had no choice
but to make a choice, being amongst those
who were free to, as far as we could tell.
Nothing to be dwelt on here but remains
of political exigencies: terrain left wild
so that something other might be tamed.

As the rain blurs sky and horizon, there’s room
for hesitancies, tact, diffusion of old solidities –
an intuition which comes up through the grass
as persistently as this changeable season’s flowers.