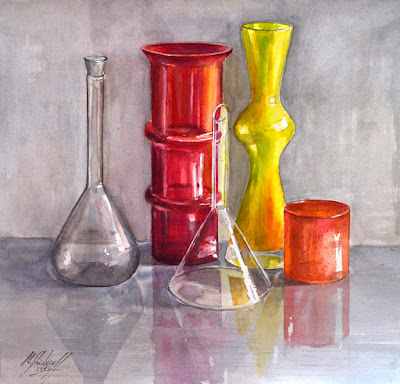 Always having to start
from here – notepad, sketchbook,
crumpled torus of a metro ticket –
to find definition in a frame
where the long world’s connections
might be allowed to fade away …

Saying I’ll keep my eye on things
scrupulously forms up
into a premise. These vases,
for instance, are clearly
without precedent
in their particular arrangement –

albeit in recessional focus,
the unreal real of representation.

A horn’s distant croak can’t help
but be a lorry in the mind’s eye –
we’ll take that as read: some
situation unfurling on the bypass
in changing afternoon light,
an unarticulated insignificance.

It is not the discovery of form
in the scrupulous observation
of the actually existing
components of the real
so much as … what?
These unfiltered things.

John Coltrane plays himself out:
endless variations on the air.

I’d hazard a guess
that observation occurs
in the interim, the pelter
of blossom that cascades
between apartment blocks –
and, yes, these vases that hold

something resembling light
in their momentariness,

in those emotive chords,
that arrangement of fingers
on a fretboard, unnoticed
until now. That’s art,
he said shruggingly –
the collector during the storm.

Nothing’s fixed.
Except, perhaps, this.
The solidity of chemicals.
Another ideology

that the mountain invites.
Rivers have no such concerns.

Denial is something you might shout
in the street. There’s a confusion
of pronouns at the crossroads.
It’s not so bad. We’re learning
to live with everything that changes.

Like a prototype villanelle,
the recurrence of thoughts
stakes its claim at significance.

On a Sunday morning,
the aftermath is summed up
in a very few words.