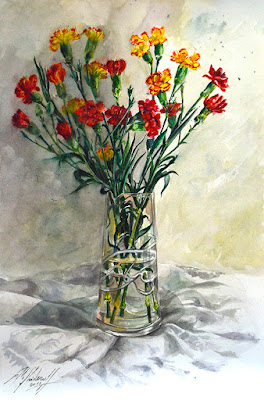 The owner of the tobacco-yellowed moustache

allows himself to spend a short time in the yard.
He turns his face towards the sun like a lizard
who’s looking for the best place for an afternoon nap.
Behind his back he hears a sound which he’s expecting:
the footsteps he remembers from the far past.
Dream or nightmare? He doesn’t know.
The walls of the building look real enough
and the colours of the flowers bloom brightly.
Did he say something he shouldn’t have?
The flowers stay the same, colourful, impartial.
A procession passes in the street. Planes
cross the sky. A car engine coughs.
The owner of the tobacco-yellowed moustache
counts the windows of his house, its eyes.
He finds a vase and fills it with reminders.