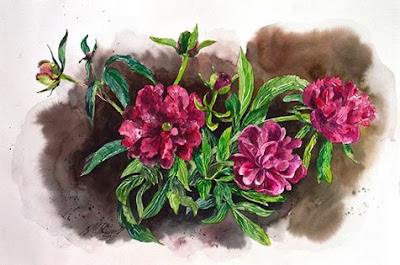 Emerging once again from European Union,
we’re back in his footsteps on this path
by late-flowering apartment balconies.
For a moment, it’s as if we’re in a film –
not a high-concept blockbuster at the mall,
but a comedy the critics would call ‘gentle’.

Nothing much happens. We cross roads
where marathon stragglers slow to a walk.
A pigeon displays an iridescent flash
around its neck. Our city’s metal labyrinth
has shifted its walls. There’s no change
in the till at the non-stop corner shop.

And, yes, that’s the evening settling down
to what we know. A local restaurant fills
with fans of Sunday league football.
There’s the smell of frying onions,
a newly opened book, a list of verbs.
And now comes a sort of hunkering down –

the chill in the air, thick winter coats,
a readiness for the journey towards spring. 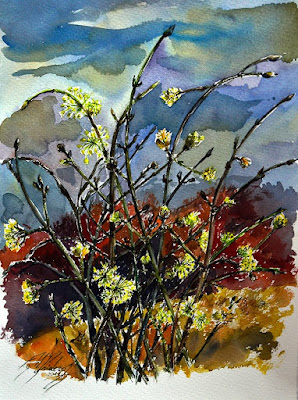 Turning one hundred my mother
would have turned to me and said:
‘You live now in Sofia?’
There’d been no way to tell her.

It’s been twenty-three years
since we spoke. Sharp red buds
were like midges coming in
and out of focus in the sunlight.

In that small room, the art
of loss was what I tried
to master. She’d gone
by then.

And now we live for the moment
when woods on the mountain brown.


Posted by Colourful Star at 17:27 No comments: At the window
sounds of migration –
swallows chit-chat on wires.
They sense the cold coming.

Commuters, now wrapped
for winter, are of a mind:
there is warmth in movement.

they keep on, keep on for
bus stops and the metro.
A queue squats at the клек:
there is warmth in coffee too.

(Less so in headlines
the chill breeze stirs
on a newsstand; no doubt
we’re in for it again.)

As if mobilized for war,
birds continue to gather
in colourful uniforms
and those who’ll remain

fuss at what’s left to feed on
in long-ago fruited trees. 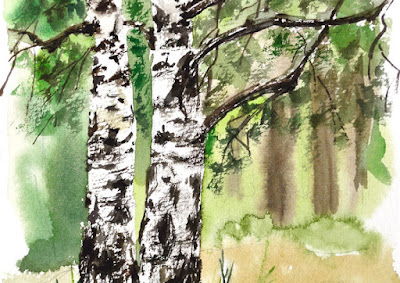 have out-shouted magpies and swifts.
Their brief electric squawks jump gaps
in the infrastructure – like us stepping over
old access points for cabling and pipes,
boiled concrete obtrusions in our street.

We don’t know much more about fields
where acres of late-season sweetcorn dry,
but the bus drops us here, beside blocks
with tiled roofs and wooden attic windows.
The gateway opens out onto walks
that lead, with some guidance, to a palace.

Trees have been brought here like us:
transplanted into an arboretum.

Posted by Colourful Star at 17:02 No comments: 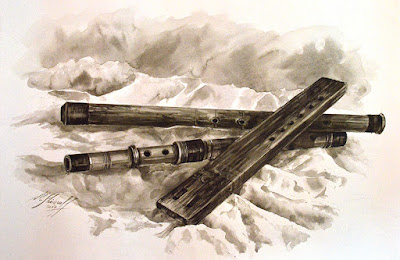 The sky works up to
a familiar rich blue,
arches over street dogs,
tourists, stray passers-by.
Open windows give out
preludes by Chopin,
plates being washed.
In the give-and-take
of our corner shop,
they know where
we're coming from.

By Дом на Киното,
there’s another home
in Irish rebel songs
and ‘Into the Mystic’.
Silhouetted now,
we’re drinking beer.
Sunset echoes
the colour of trams.
It’s fine, I’m saying,
we don’t need a taxi,
we can walk from here.

Posted by Colourful Star at 17:43 No comments: 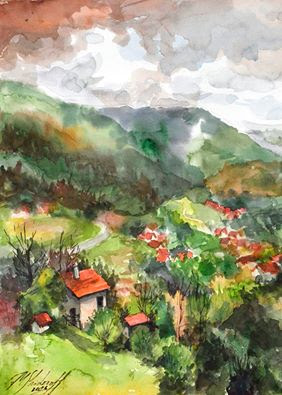 Running ahead of a stormfront,
these unladen clouds might be
the herd of wild mules we passed,
smashed windows of vacant factories,
jammed trams along Алабин.

Two boys walk home across
sandy moorland marooned
among earthmovers, locomotives
and a logo’d container
from a long-bankrupt firm.

We’re gone in an instant –
rasping through tunnels
that bring us out into night.

Over one-lev espressos,
he leans in and says: “The thing
with this whole country is
it holds too many poems.”

Posted by Colourful Star at 16:15 No comments: 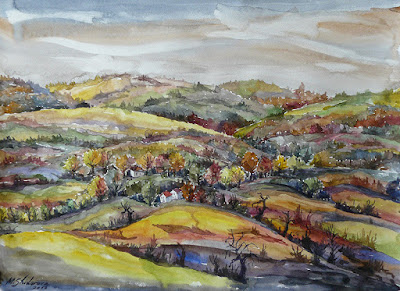 The broken-open figs on our path
are the footprints of a summer
that’s getting ready to leave.
So far it’s reached our gate.

over bar terraces, parks
and sunflower fields.
Summer's pleased with itself.
Maybe it should be.

Only the breeze in the fig tree
summons it: time to go.

Posted by Colourful Star at 16:11 No comments: